There has been a school on the site since 1878. Tragically, the previous school was destroyed by bombing on Sunday May 30th 1943. It being a Sunday, the school was empty, though our local Church of Saint Mary the Virgin was also badly damaged, resulting in many casualties including children and teachers from the Sunday school. The school log book contains this poignant entry for the following day:

As a result of enemy action yesterday, this school was seriously damaged and appears to be beyond repair. Before alternative arrangements can be provided the children attending the school have  been given a weeks holiday.

To remember this sad day, in 2003 we planted a tree of remembrance in the school grounds. In an unexpected twist, when planting the tree we dug down to unearth the foundations of an old farm building, which we have preserved as a seating area and object of historical significance. 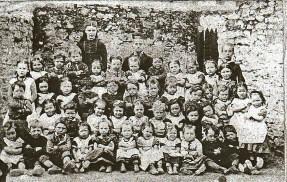 12th June 1828
Trust deed for establishing a school in St Marychurch, endowed by Edward Protheroe. A cottage and land were bequeathed in Priory Road, later enlarged. Vicar of St Marychurch and others appointed as Trustees. House contained dwelling apartments for master and mistress and a schoolroom for boys and girls (70 in total by 1833)

1878
Limitations of the site and the buildings were recognised and a new National Boys School was built in Hartop Road, leaving the Girls and Infants in the old premises.

1902
The Boys and the Girls and Infant School were both described as Church of England Voluntary Schools.

1928
Monday 16th May, after extensions and necessary alterations had been made at the Hartop Road School, the Junior girls and Infants left the old premises and joined the Junior Boys in one Junior Mixed School. The accomodation was for 200. Number on roll 214.

1943
20th May, the school building was destroyed by wartime bombing.  The St Marychurch pupils, together with Babbacombe CE, were transferred to Westhill Junior School, where the schools preserved their seperate identities until 6th september 1943. On that day St Marychurch C of E School was amalgated with Westhill County Junior School.

1958
9th september. St Marychurch C of E Primary School was opened on the site of the school bombed 15 years previosly. It was built to accomodate 160 pupils. 66 pupils were admitted, 24 boys and 42 girls.

1975
6th June Official Blessing and opening of 2 new classrooms. The accomodation was increased to 240.

2001
The opening of a Nursery and Family Learning Centre completed a lengthy programme of expansion and alterations. the school was renamed 'St Marychurch CE Primary and Nursery School'. Accommodation 315 full time places in the Primary School and 52 Half time places in the Nursery.

We started school when we were three. I think most of us were put in Mrs Fentons Class.
I remember Sports Day on the golf course by what is now the 18th green.
Going the short walk to Church on Ash Wednesday and then having the rest of the day off.
Picking walnuts off the trees that were outside using the green outer shells to make our fingers green to pretend we had been smoking.

I started school at five years old at the Infants St Marychurch in Priory Road. Miss Lintern was our teacher, it was more or less one classroom and there were curtains instead of doors.
On Empire day we would dress up. A boy and a girl would walk together to represent different countries. I walked with Paul Clifford and we were India and I carried a bowl of rice.

"Do not be afraid, do not be discouraged, for the lord your god will be with you wherever you go." (Joshua 1:9)